PISA Results and the Lessons We can Learn 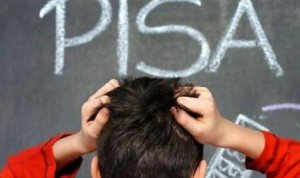 As we compare US Students to the rest of the world’s learners, we have a set of metrics we can use to see how different educational systems measure up against each other. This is the PISA. The idea is to test what 15 year olds know, and what they can do with what they know.

Here are the results for the United States. Among the takeaways:

WHAT DO POLAND, FINLAND AND SOUTH KOREA HAVE IN COMMON? 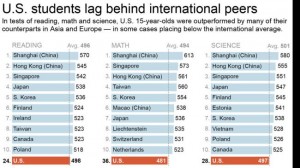 Not much on the face of it.  But all three countries had their kids make dramatic gains on the PISA test.  This test is designed to evaluate how well 15 year old kids around the globe can think and solve problems.  The test is indeed more demanding than multiple guess tests, at least at a higher level where you have to write in an answer. It does require some thought, and it could easily have some cultural biases built in, as some critics have charged.

Sample questions can be found at http://pisa-sq.acer.edu.au/ or http://www.oecd.org/pisa/test/ (math only)

WHY DOES THE PISA MATTER? 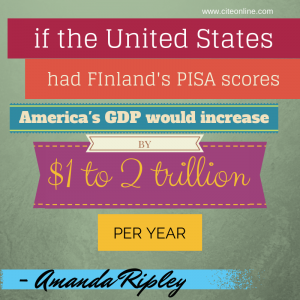 Test results are highly relevant from an economic perspective because, as Amanda Ripley writes in The Smartest Kids in the World,  “economists have found an almost one to one match between PISA scores and a nation’s long term economic growth…if the United States had Finland’s PISA scores, GDP would be increasing at the rate of one to two trillion dollars per year.”  That’s a lot of money.

So here’s what the countries have in common:

Here’s some things that don’t correlate with PISA success

Ripley’s conclusion is that rigor and high expectations matter above all.  If we  demand and expect that our children will learn, and we give them a very concrete, high stakes evaluation, then learn they will. 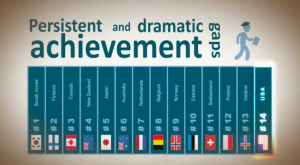 Now, there’s something interesting in the results that jives with my experience in Japan.  No one in Korea thinks that their system, an insane pressure cooker approach, featuring school, more school and after dinner tutoring until 11PM is desirable.

I remember seeing Merry Christmas, Mr Lawrence, a movie written and directed by Nagisa Oshima about a POW in Japanese war camps during WWII.  At one point, a camp guard says to David Bowie’s character that the Japanese couldn’t go insane individually, so they went insane collectively.  Part of that was a response to a long tradition of a pressure cooker approach to learning (driven in part by the complexities of learning to read Japanese, but I digress even further).  So we shouldn’t conclude that if we only copied South Korea, or Finland or Poland, everything would be hunky dory.  But their results, and our mediocre results combined with the common complaints about the level of reasoning ability of our grads, should give us pause to reflect on our system.

For further reading, on what the PISA Results mean, check out the always thoughtful ASCD’s Whole Child Blog  which focuses on takeaways relating to socioeconomic status. The PISA results show correlations between a student’s socioeconomic status and indicators like school climate, discipline, attendance, grade repetition, and resources. This post breaks that down into interesting quotes from the report.

Jared Gellert is the executive director for the Center for Integrated Training and Education .