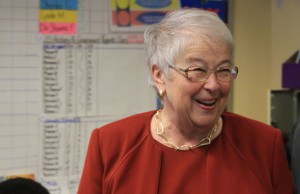 There’s an interesting interview of Chancellor Fariña on Chalkbeat.  I want to highlight her school by school approach, two very good metrics she is using, her emphasis on professional development and the issue of the relationship between the board of ed and principals.

Fariña is highly oriented towards solving problems one by one, school by school.   The Chalkbeat framework to the article says “Many educators and parents praise Fariña’s school-by-school approach, saying they feel respected and reassured by her intimate knowledge of the system. But her critics often scoff at it. Those who identify as education reformers (a label Fariña also applies to herself) say her theory of change is too incremental and founded on experience over research, while some principals complain about micromanaging.”

There is a similar debate right now in the Democratic party, where Hillary Clinton believes in incremental improvements, while Bernie Sanders wants a “revolution” and radical change.  Christopher Hayes from MSNBC calls this the distinction between institutionalists and insurrectionists. The Education Reform movement seems to be largely made up of insurrectionists, whereas Fariña is tacitly arguing that what is needed is not some grand new scheme but rather a lot of basic blocking and tackling.

The blocking and tackling is done through professional development.  She sees this as absolutely crucial.  At one point in the interview she says “training is everything.”

Fariña has two key metrics that she emphasized, much more than graduation rates (which can be manipulated) and test scores.  She places great attention teacher and principal retention.  The idea is simple:  if people aren’t satisfied, a larger percentage of them will leave and that will be bad for the system.  The desire of people to stay is a key indicator of the health of the system as a whole.  Farina gets that.

She is also taking a highly collaborative approach, at least in her rhetoric.  She says her guiding light is “together we can make a difference.”  There’s no question that some principals aren’t feeling that message, that some feel like they are being micromanaged and some feel like the board of ed is spying on them to gather evidence, rather than to help. It is surprising to me that this dispute about autonomy in low performing schools has gone public.

An interesting interview, well worth the read.  Here’s the link.

Jared Gellert is the Executive Director for CITE.