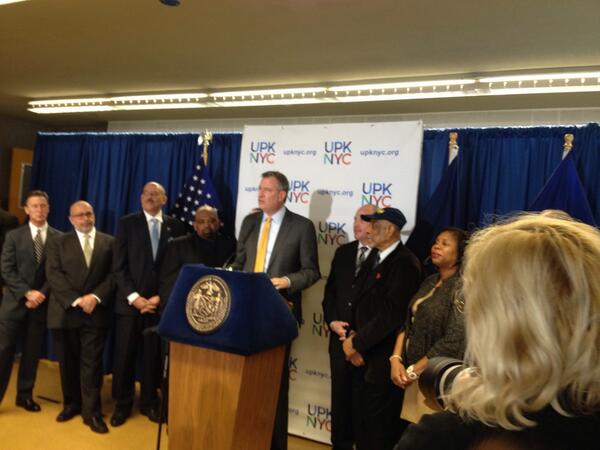 Mayor DeBlasio stood with labor leaders today to announce his plans for a Universal Pre-K program in NYC. Mike Mulgrew was there, representing the Teachers’ Union @uft, while on hand were reps from Central Labor @centrallabornyc, the Council of Supervisors and Administrators @followcsa, the 1199 Hospital Workers Union @1199seiu, the Property Services Union @32bj_seiu, the Retail, Wholesale, and Department stores Union @rwdsu, and the Hotel Trades Council @nyhtc.

The labor leaders spoke in support of the mayor’s plan for Universal Pre K and After-School programs. Peter Ward of the Hotel Workers Union followed Mike Mulgrew of the UFT. Ward cited his own experience in an after-school program, in a building now closed by budget cuts, saying that his parents could be sure he was safe and learning while they worked – a theme the Mayor later used in his pitch. Ward said of the tax that would fund the program, “Taxes reflect the values we have.” Mulgrew added, “We think we’re at a moment in time when we can get this done.” Asked why Mulgrew withheld his support for De Blasio’s plan just a few months ago, and what had changed, Mulgrew said that De Blasio and his staff understood not only how to fund, but how to implement the program. Their handle on the mechanics of rollout convinced him.

De Blasio acknowledged the support of the labor leaders, citing their membership as 1.3 million New Yorkers. “Everyone up here,” he said, “works to create economic fairness. That’s what the labor movement is about.” He said it was a rare occurrence to see the full support of such a wide swath of labor, and that it shows the importance and necessity of the idea. He cited also, “the electoral mandate I received,” as evidence of New Yorkers’ support for his agenda. 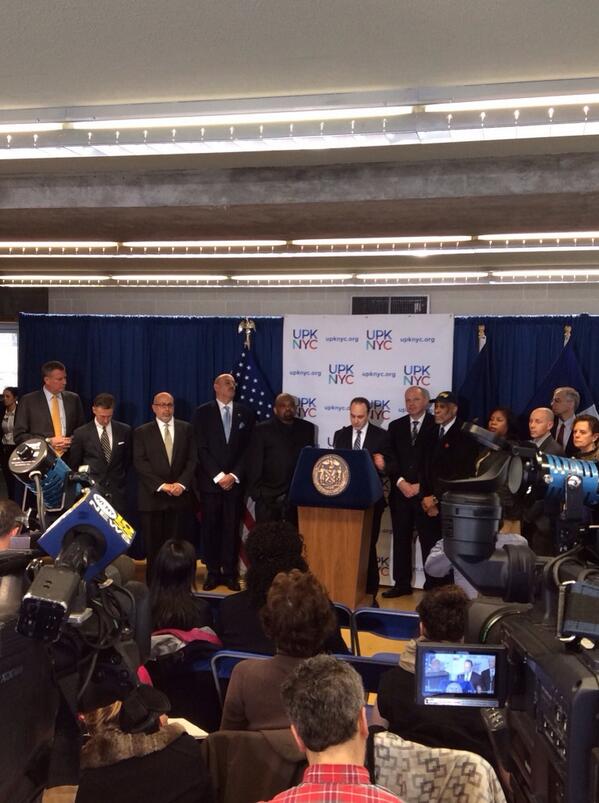 De Blasio’s plan includes a 5-year dedicated revenue stream to fund universal pre-k and after school programs for middle school students, funded by an increase in city tax on families earning over $500k per year, from 3.9% to 4.4%. After five years, the plan calls for finding funding from within the city’s budget. The tax would end at that point. The Mayor referred to the tax as the price of a small soy latte per day, to put it in context. He spent some time in the Q&A noting the difference between money coming from the state, and the city tax he’s proposing. “We’re talking about the ability of the people of NYC to tax ourselves. Not state taxes. We’re raising the revenue ourselves. We respect the Governor pursuing what he thinks is right about state taxes.” He said that the past three mayors have gone to Albany for permission to raise money and were granted that right.

About accepting state funding, De Blasio joked with a reporter: “Have you ever been in government?” and elaborated: “When budget cuts come, children take the hit… We don’t want partial funding… If there are other state resources we have other needs for them. This is the right thing to do and has popular support.”

The plan would cost $530 million each year. De Blasio’s five-year tax on families making over $500k would fund this while the city finds other sources of revenue to take on the cost after five years.

The goal: “every child at pre-k age has full day pre-k available within a reasonable distance to their home. No wait list. Locally available. I think I can appeal to the working members of the press … if your child has a half day, that doesn’t solve the problem. People are working 2 jobs, longer hours. Parents need a greater safety net than literally any other time in our history. There would be a guaranteed afterschool seat maybe at their school or the library or non-profit.”

On the rollout: “We’re sure the after-school can get done for September 2014. We know about pre-k that there are places with additional capacity. We can make some available in year one. We know what it takes. It takes leasing, creating pre-k centers serving several schools within ½ mile, taking space pressure off those buildings. We know exactly how to do it. A number will be ready September 2015.”

As De Blasio laid out his plan, Governor Cuomo was announcing his plans for a statewide tax cut. The Governor is also expected to announce funding for statewide universal pre-k in his State of the State address. This could be an interesting issue to watch as it develops. De Blasio refused to comment until he personally heard from the Governor about the plan. As De Blasio said, no one is debating the value of pre-k, only about how to get it done. He sounds confident that his team can generate enough support to get this passed. “You know plenty about the legislative process. We have to build support…There’s no dichotomy in saying this won’t be easy but we’ll be victorious.”

Click for information on our Administration, Teacher Certification, and Counseling programs.